Get me outta here!

Other fabulous natural cancer fighting foods include green veggies, mushrooms, beans, berries and seeds.  All of these foods are Angiogenesis inhibitors;  which means that they inhibit blood vessels in cancer and fat cells from growing.

Isn’t this some great info to share since tomorrow is October 1st and it will officially be “Breast Cancer Awareness Month?”  Pass along this info to those you love– 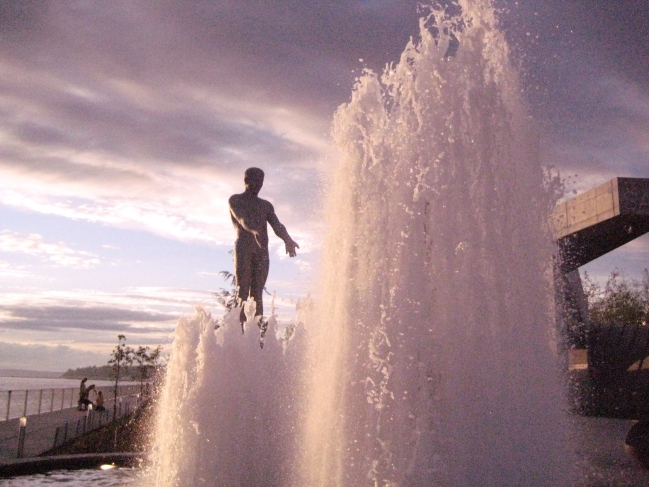 I once had a dream. I dreamt I was at a beautiful enchanting resort and the resort was throwing a pool party.  A few of my tight knit friends were there and we decided to go wait in line for the high dive.  There were several people already waiting in line and it took awhile for the line to move.  Finally, after waiting awhile I approached the steps to the diving board.  I slowly climbed the steps and walked out to the ledge to take my leap.  I looked down at the water and suddenly realized how magical and sparkling it looked–this was no ordinary pool…

It was the fountain of youth!!  I happily dove into the warm and bubbly pool, filled with healing minerals and vitamins.  The water  was crystal clear like it is in the islands of the Caribbean. The pool almost felt fuzzy–it was like swimming in an expensive glass of champagne!

I awoke feeling refreshed and alive, the best kind of feeling in the morning.  How I would love to dream that dream every night! It got me thinking– Does the fountain of youth really exist?

It does!  I found it and  you can too.  It’s not a skin care regime here and there, or a supplement, or a diet– it’s a lifestyle.  Through the years I’ve found some amazing keys to staying young.  Here is my first longevity secret:

Stay hydrated!  Drink lots of water–when you feel thirsty your body is already dehydrated. Drinking good quality water; filtered or alkaline (ionized) preferably.  Alkaline water penetrates your cells with hydration while balancing and restoring them.   If you can’t afford a Kangen machine, (great machines but very pricey) then try out a brand called “Penta” or another brand named “Essentia.”  Trust me, one afternoon on Alkaline water and your body will tell the difference.

Stay tuned to my upcoming blogs for more longevity secrets!

To your health and happiness,

Stay tuned to my blog for more longevity secrets!

Ever want to have a superpower like Spiderman, Catwoman or Superman?  I do!  Well, this is as close as you can get.  These foods all support your immune system and promote longevity among other health benefits.  Here are a few of my favorite Superfoods on earth–I recommend you give them a try!

1. Goji Berries– Goji berries are one of the most nutrient dense
foods on earth, containing 18 kinds of amino acids and up to 21 trace minerals.
They can be found growing on vines in desert regions from America to Asia. Loaded
with antioxidants and phytochemicals; they are believed to be one of the richest
sources of Vitamin C on the planet. Goji berries are known to curb appetite,
fight inflammation and improve sleep. They are prized for their anti-aging,
mood boosting and immune building effects on the body.

2. Maca– Grown high in the mountains of Peru, maca is a
root plant noted for its energy and stamina increasing properties. Aiding the
nervous and digestion system, it is composed of 55 different phytochemicals and
20 different fatty acids. Maca regulates hormones, reduces stress and has an
anti-depressant effect. This amazing plant also enhances one’s memory and
learning ability.

How to make a fruit candle:

Take an orange, lemon or grapefruit and cut it in half.  Eat the middle fruit portion, leaving the center stem of the fruit in tact.  Pour olive oil or vegetable oil into the fruit just below the top of the stem.  Light the stem.  Set the fruit candle on a flat candle holder. The candle will burn for hours and make your home smell wonderful! 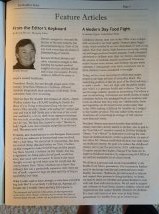 This month, I was lucky enough to have my childhood obesity article featured on the front page of the magazine, The Voice!  (right next to the Editorial)  What a way to start the month!  Since the photo print is so small, I’ve included a copy of my article below–for your reading pleasure.  If you would like to check out more of my articles go to my website, pacificnorthwesthealth.com and click on the “Published Articles” link!

Childhood obesity rates first rose in the 1980’s when a major shift occurred in our food supply.  Farmers grew bigger crops which resulted in an over-abundance of food in our nation. Fast food chains, high fructose corn syrup and eating out became hugely popular, as well as larger portions. Food companies advertised to children more than ever before, which increased the amount of food that families purchased. Electronic media became mainstream, and children became more sedentary. Consequently, over thirty years later, one in three children is now considered overweight.

Today, we live in an environment which encourages people to eat large portions of unhealthy foods. The underlying problem is that the goal of the food industry—to make a profit— does not align with the public health goal, which is to promote health and wellness. The food and beverage industry spends an astonishing sixteen billion dollars a year on advertising. Advertisers use health claims to make consumers believe that packaged foods are healthier and lower in calories than they truly are. Additionally, fruits and vegetables are 40% more costly today than in the 1980’s—making it difficult for families on a budget to buy healthy produce. This has added to the reason Americans are consuming an average of 700 calories more than they used to.

We all have a personal and social responsibility to the health of our future generations. Our community leaders need to encourage families and communities to make healthy decisions.  Health-care providers need to educate and support their patients in living healthier. At home, we need to teach our children and grandchildren to cook with real food and exercise more. We all need to support and volunteer at local farms, farmers markets, schools and organizations that support healthy lifestyles for children. For more information on how you can help future generations live healthy lives, go to letsmove.gov.

Greetings from the Great Pacific Northwest!  I’m finally back from our amazing camping trip on the Washington Coast and in the Olympic National Forest.  It was fabulous (amazing photos coming later—stay tuned!).

There were so many new adventures!  We visited Rialto Beach (surfers, fog, driftwood, and amazing rocks) and Lake Quinault (quiet, amazing sunsets, picnics).  We saw two world famous trees (the largest Sitka Spruce tree in the world and the 3rd largest red cedar tree) and hugged them.   (They hugged us back too!)  My mom was lucky enough to kiss a starfish and a sea anemone by falling in a tide pool on her birthday —the caption should have read, “Beach 4—it’s a Splash!”

We also visited Ruby Beach (my favorite and most picture perfect spot) and Kalaloch Beach (amazing sand, waves, and a 3 minute walk from my tent)!  La Push and Forks were on the list too (no vampires attacked luckily).  Oh, and I made delicious campfire veggies (I’m still craving them!)

We packed up in the rain and all my clothes smelled like a campfire by the time we got home–but what a great trip!  It was just what I needed!

It’s time to get away.  Time to find some peace, some serenity, and reconnect with my spiritual being.  My heads been so caught up in school and other life events this summer that I feel my connection to my higher being and the spiritual side of myself is lagging behind.  I miss it.

So in the morning I’m off to two of my favorite places ever… the Washington Coast and the Olympic National Forest.  It was there, last year that I fell in love with Washington State.  We camped up on a bluff overlooking the sea and underneath these magnificent trees.   We hiked in the humid Hoh Rain Forest and walked down the sand at Ruby Beach when the tide was out.  We studied the stars at night while the waves crashed on the shore.  There was something magical about that trip…something magical about that place.